The End is Nigh: Four Post-Apocalyptic Novels to Read Now 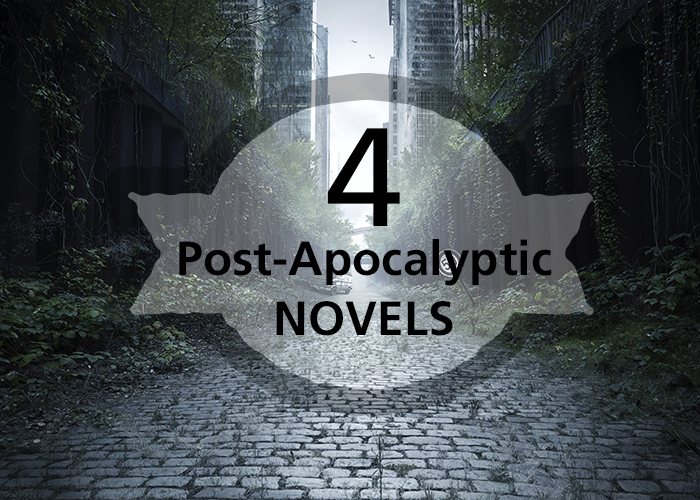 As a kid, I spent quite a bit of time worrying about global nuclear annihilation. I was seven when the made-for-TV movie The Day After aired, too young to process much of the plot but old enough to remember the images of people being reduced to skeletal outlines by the flash of nuclear explosions. I also remember the movie ending with a chilling disclaimer: “The catastrophic events you have just witnessed are, in all likelihood, less severe than the destruction that would actually occur in the event of a full nuclear strike.”

Yeah, thanks for the childhood trauma, ABC.

Still, the threat of imminent world destruction did have an upside. Some of my favorite entertainment of that decade was inspired by the looming apocalypse—everything from the Saturday morning cartoon Thundarr the Barbarian, to comics like Hex or 2000AD, to the short-lived teen novel series Fire Brats.

I’d like to think that my interest in the apocalyptic has since grown more literary and slightly more adult, but it certainly hasn’t waned. A lot of my favorite media from the last decade has been from the post-apocalyptic genre, like Cormac McCarthy’s novel The Road, Alfonso Cuarón’s film Children of Men, or Alan Weisman’s non-fiction thought experiment The World Without Us.

More recently, I finished reading Station Eleven by Emily St. John Mandel, this year’s Arthur C. Clarke award winner and a finalist for the 2014 National Book Award. Mandel will be coming here for Spokane is Reading this fall, so if you haven’t yet read Station Eleven yet, I highly recommend it, even if the post-apocalyptic genre isn’t normally your thing. And if you do end up enjoying Station Eleven, here are a few recent, post-apocalyptic novels you might also like.

After spending the last few years producing YA fiction, the author who previously took home the Hugo and Nebula awards for The Windup Girl, has finally returned to adult fiction with his newest book The Water Knife. In this noir-flavored, near-future thriller, the American Southwest has been devastated by perpetual drought, with the wealthiest living in verdant complexes irrigated by perpetually recycled water and everyone else struggling to survive in dust-storm-plagued suburban ghettos. Former gang-member Angel Velasquez is working as the eponymous “water knife,” a mercenary running covert operations for the corrupt Southern Nevada Water Authority, when rumors of a possible new water source near Phoenix lead him to uncover a web of political intrigue and a growing trail of bodies.

The Country of Ice Cream Star

In the world of fifteen-year-old protagonist Ice Cream Star, eighty years have passed since the disease now known as “posies” wiped out most of the population. Only African-American children and teens showed any resistance to the virus, and they too are doomed to succumb to the illness not long after they reach twenty years of age. Ice Cream Star’s older brother and the leader of their tribe has begun to show signs of the illness himself, so when Ice Cream Star meets a mysterious light-skinned foreigner in his thirties who claims that his people have a cure, she sets off on a quest to save her brother and her tribe.

Almost all of the nearly six-hundred-page novel is narrated in an imagined future dialect of English, a mashup of African-American vernacular and Newman’s own invented vocabulary. Some readers might find that jarring, but once you let yourself become immersed, Newman’s prose can be beautifully rhythmic and lyrical.

In the newest novel by the author of the literary werewolf tale Red Moon, the Lewis and Clark expedition is reimagined in an America that has been decimated by an unchecked flu pandemic and the last-ditch nuclear strikes launched to contain the disease. In the walled city Sanctuary, a haven in the ruins of former St. Louis, survivors cling to their low-tech existence under the watch of Sanctuary’s tyrannical rulers. But when a rider from beyond Sanctuary’s walls reports that life still thrives west of the Cascades, reclusive museum curator Lewis Meriwether and hard-drinking city guard Wilhelmina Clark lead a group of fugitives out of Sanctuary on an epic journey to the Pacific Northwest.

Wasp has a difficult enough job as the Archivist, tasked with documenting the enigmatic ghosts that inhabit her post-cataclysmic world and hoping, thereby, to uncover some hint of the world before. Add the brutal, tyrannical priest who oversees her work and the upstarts who regularly challenge her position in brutal fights to the death, and Wasp’s calling seems particularly thankless. So when Wasp encounters a ghost in search of his lost soul mate, she offers to help him in exchange for a chance at escape, only to embark on a quest that threatens to unravel everything she thought true about her world. This genre-bender, which Kirkus Reviews calls“a ravishing, profane, and bittersweet post-apocalyptic bildungsroman [that] transcends genre into myth,” is being marketed as teen fiction but ought to be sophisticated enough for most adult readers as well.