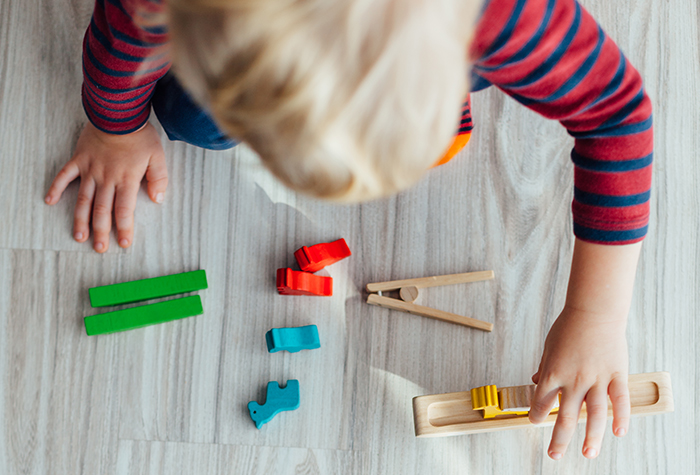 Blocks! Kids love them and parents love them. Most preschool classrooms and child care centers have blocks. Building programs seem to be everywhere. In fact, we’re having a week full of block and building activities at our storytimes this summer. You may be thinking, “Great! But why!?”

My answer would be that it’s fun to take some time and really watch children playing with blocks. The child’s creativity really comes through, and you can actually see children problem solving as they try to keep their structure upright. Plus, it all goes well until little brother or sister comes through and knocks it down.

Does this sound familiar? Have you seen this in your own children? It’s all part of the seven stages of block play.

The first stage is carrying blocks. You’ll see babies and toddlers just walking around with blocks. They’ll put them down, pick them back up, and carry them to a different spot. They may or may not bring them back to where they took them. This is also the age where they love to knock blocks down. This is also when you may hear a scream from your older child, followed by “She knocked my building down.”

Then around ages 2–3 you’ll see them start to stack blocks. This could be straight up or in a line, side by side.

Once this is mastered, or almost mastered, you’ll see children starting to make bridges. Some trial and error happens during this stage as they try to arrange the blocks so they don’t fall off their base.

Then children move into the stage that takes up a large area of your living room, family room, or their bedroom. From building bridges, they move into building enclosures which usually happens around age 4. When children make enclosed areas with the blocks, they may refer to the area as a house, a cage, or a play area. They are working on their spatial skills as they figure out how to configure the blocks to close the area in.

When patterning and symmetry come into play, children may line up the blocks in a particular pattern with different shapes of blocks. Children will also start to make things look even on both sides of the structure they are building making sure they are using the same blocks. At this point you notice the child saying to another child, “But I need that block!” And you may be left thinking, Should I let them work this out or intervene? Whether to intervene totally depends on the situation. I would usually let my children try to work it out, unless I saw that they were about to come to blows.

This is also the time when everything else in their toy box becomes an accessory to what they built. Children start to add animals, dinosaurs, doll house furniture, dolls, scarves, cars, and trains. Anything is fair game. You really see their creativity emerge.

At around ages 4–5, children move on to the early representational stage, which is starting to create structures they are familiar with in their daily lives.

Once they hit school age, you’ll see them creating more complex structures with intricate details, which is the later representational stage. Children will start to replicate a castle or a specific structure with their building. When my kids were about 4 years old, they started to declare that they had a game going on in the family room and we were not to take it down. Once you entered the family room, there was an entire city built with every block we owned and an entire train set going around the city. Most often there were roads, animals, cars, and people populating the city. It was a big deal to my little ones, and negotiations were made over how long their city could stay up before it was time to clean up the room.

There you have the seven stages of block play. Most children move through these stages in order, but not always. Once they have mastered a stage, you may see them moving back and forth between the stages.

Who knew there was a process to building with blocks? Fun fact: Educators started studying how children play with blocks in 1924.

During the week of June 19–23, our Storytime Mash-up theme will be Building for all ages. As part of our Build a Better World summer programs, you can bring the family to our Hands-on Building events during the week of July 3–7 (no events on July 4). Kids and families can build with KEVA planks, straws and connectors, architecture blocks, and other kid-friendly construction materials.

Both of these are great opportunities for you to get down on the floor with your child and explore the different types of building materials that your child may enjoy. We hope to see you there.

This article is first in a 2-part series. The second article is Block play and kindergarten readiness.

Mary Ellen Braks is the Library Services Manager in charge of Early Learning for children, from birth to age 8, for the Spokane County Library District and has been working in libraries for 29 years. She has a Masters in Library Science from Simmons College and has worked as the Head of Children’s Services at the M.G. Parker Memorial Library in Massachusetts and as a Reference Librarian for children and teens at Longmont Public Library in Colorado. Before her library career started, Mary Ellen worked in child care and as a preschool teacher while completing her Bachelor of Science degree in Early Childhood Education at Fitchburg State College in Massachusetts. Her current position is the perfect combination of her degrees and passions—children, books, and education.