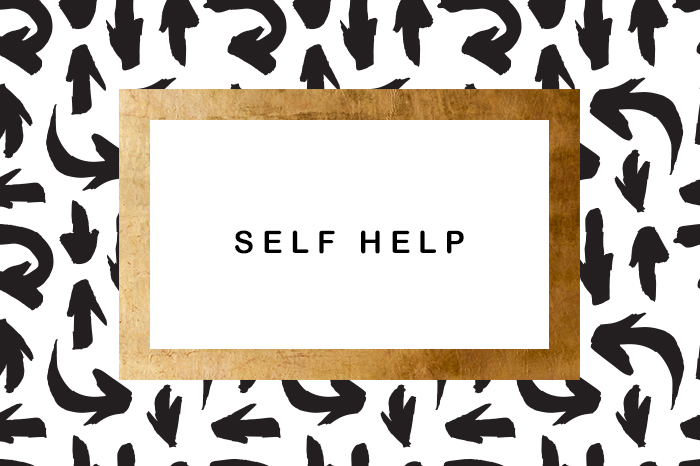 Guilty Pleasures is a new series in which Library District bloggers share their often embarrassing literary, cinematic, or musical obsessions.

“So how’s your Elizabeth Gilbert book?”

I turned away from Big Magic, the latest by the author of Eat, Pray, Love, and studied my spouse before answering. Sure enough there was a glint of literary judgment, mockery even, in his hipster bespectacled eyes.

“It’s really good,” I murmured noncommittally, shifting so he couldn’t read over my shoulder.

“Is Elizabeth Gilbert your spirit animal?”

I ignored this and continued to read.

“I really liked her on Little House on the Prairie.”

This I couldn’t ignore. Brian can mock my reading all he wants, but getting authors wrong (or worse, confusing them with with my favorite childhood actors) is unforgivable. Still, I know better than to get all uppity, up there on my high horse. After all, I am a person who reads self-help books.

I’m well aware of what my self-help habit says about me. It says a) I’m a mess and b) I’m not a serious reader. I’ll own that I’m a mess: I started reading self-help in college to try to deal with my first bout of debilitating anxiety. And even though I’ve lived with the anxiety for a long time, and more or less have my act together, I still turn to the genre to feel less alone in my ongoing state of disorganized goals, horrifying moments of really unseemly irritability, and free-floating existential angst. But what it says about me as a reader? Not necessarily true. I read literary fiction. I mean, I’ve never finished a David Foster Wallace or William Vollmann book, but I like Jeffrey Eugenides, Jennifer Egan, Anthony Doerr, and Margaret Atwood. I can hold my own in a book group. Rich symbolism and crisp sentences are, in fact, my jam.

I also know there are a lot of really awful self-help books out there. The worst tend to have a number in the title, be based on the “Law of Attraction,” or have a photo of the author on the cover. These are the ones that give the genre a bad name. But there are a number, especially in recent years, that are original, witty, intelligent, even, I daresay…literary. These books combine psychology and philosophy, memoir and humor, sparkling prose and visual art, to become something that completely raises the traditionally sort-of-embarrassing genre. What follows are a few self-help books, all published in the latter half of 2015, that I don’t have to feel guilty about at all.

By Michael I. Bennett and Sarah Bennett

“If you want to make good decisions or get good advice about them, don’t pay too much attention to your feelings.” This bit of wisdom, from both the book and the author’s website, isn’t meant to make you feel bad if you’re the sort of person who would move cross-country for a crush, or make voting decisions based on whether or not a political candidate is “likable.” In fact, the author—a veteran psychiatrist—has seen enough of mild to major human suffering to know that we all tend to do this, at least a little.

With the help of his comedy writer daughter, Sarah, Bennett uses salty, profane language to break down some essential truths: goals matter more than feelings, accepting reality is the only sensible response to living in an unpredictable and sometimes harsh world, and having a sense of humor will get you farther than any clinically-aided, deep insight might. Think of this one as being sort of like Thug Kitchen, but with philosophy instead of recipes and food photos.

Readers of Lawson’s blog, The Bloggess, and her previous collection of essays,  Let’s Pretend This Never Happened, already know her to be as hilarious as she is manic. In Furiously Happy, Lawson describes her lifelong struggles with anxiety, depression, rheumatoid arthritis, and a host of other related disorders, along with how she began to cultivate experiences that made her weirdly and ridiculously happy.

With antics ranging from amassing a huge collection of unusual taxidermy animals (one of which is featured on the book’s cover) to placing a six-foot-tall metal chicken on the front steps to “surprise” her long-suffering husband, Lawson’s unorthodox approach to mental self-care isn’t for everyone, but it definitely entertains. Presented as a series of episodes and observations glued together by “spilled boxed wine and the frustrated tears of baffled editors”, Furiously Happy is nevertheless also serious. Lawson is unflinching in describing her own experiences and how mental illness is still so misunderstood.

The “big magic” that Gilbert writes about is creative inspiration. Using the imagery of religious mystery, she explores creativity in her life and the lives of her writing, painting, screenwriting, and designing friends, and then describes how inspiration chooses to reveal itself to us mere mortals.

We can either choose to take up where inspiration leads us, or let it move on to someone else. Gilbert illustrates her point with stories from her own career, most notably sharing how a secret book idea she didn’t have time for ended up being published as a novel by an author she’d never met (but ended up befriending). This is a great book for frustrated and/or dispirited creatives. Gilbert’s generous spirit is infectious, and she aims to show that there is little need for professional jealousy or any kind of suffering for one’s art. If you’re open to inspiration the ideas will keep coming, she writes, often more than you could ever use.

The Crossroads of Should and Must: Find and Follow Your Passion

Luna, a designer of smartphone apps, started The Crossroads of Should and Must as an online manifesto on the Medium blog in 2014.  “Should is how others want us to show up in the world — how we’re supposed to think, what we ought to say, what we should or shouldn’t do,” she writes. “Must is who we are, what we believe, and what we do when we are alone with our truest, most authentic self.”

Going on to describe the difference between jobs, careers, and callings, while also examining why it’s so terrifying to pursue “must” in a world that rewards “should”, Luna tells her own story of arriving at the crossroads of “should” and “must” and how she figured out how to share what she learned with others. Nothing she says here is terribly new, but the way she says it feels original and fresh. With dozens of sketches in black and white and color, this lovely book is as much an art object as it is a how-to guide.