May I Pet Your Dog, Please? 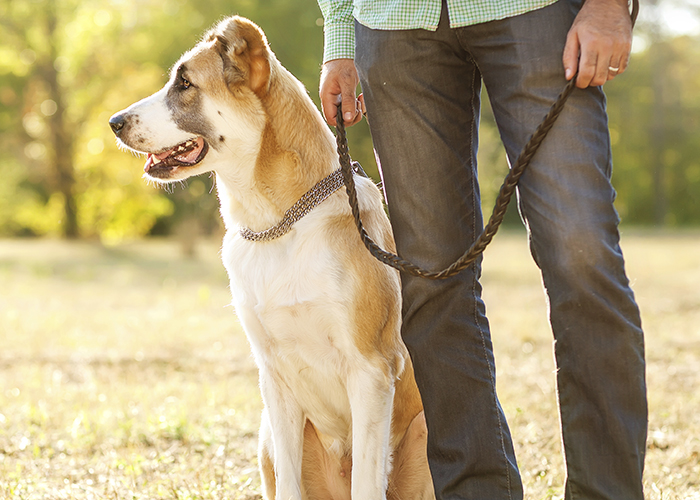 Recently, my girls have become obsessed with dogs. Any dog they see, they want to pet. We’ve been driving down the road and had them beg us to pull over because they want to pet a dog (we don’t pull over.) If we are at the park and a dog shows up, that is where they want to be. When we Skype with Grandma and Grandpa they ask them to put the dogs on the screen so they can say hi. Despite the begging, we have no plans to add a pet to our family anytime soon. We’re just mean that way.

But since they have become dog stalkers, we’ve made sure to teach them some basic safety precautions for interacting with dogs. They need to approach a dog’s owner first and they need to make sure not to get too close in case the dog is not friendly. They need to politely ask the owner if they may pet their dog and wait for their answer before going in for the loves. We’ve explained that some dogs are not friendly with everybody, and some are even scared of kids. We’ve told them scared dogs might respond by trying to protect themselves, which could include growling or even biting. If the owner says no, then we thank them and walk away. We don’t want our kids to be scared of dogs, but we also want them to have a healthy respect for them.

We have also talked with them about service dogs and that we need to not distract them from their work. While I felt we had done a pretty good job educating our girls on dog safety, I wanted to make sure there wasn’t something important we were missing. In the process, I found some great advice, and several safety precautions I wasn’t aware of.

While we had talked with our kids about getting an owner’s permission first, we hadn’t talked about getting the dog’s permission. Many of the sites I found urged just that. Let the dog approach you first. If a dog enjoys affection, and is ready to interact, they will come to you. Often dogs will want to sniff, but sniffing isn’t always a sign they are ready for affection. What do they do after sniffing? Do they rub up against you, or nuzzle in? If so, they are welcoming your attention. If they walk away, do not go after them. Respect their desire for space. Another fact I didn’t realize until I did some research, is that most dogs don’t like to be patted on the head, or patted in general. Although, when you imagine it being done to you, it’s easy to understand. Unfortunately, many kids naturally try to pat dogs. Instead, teach your kids that it is better to scratch the dog’s chest; most dogs enjoy this kind of touch. Also, when you pet their chest your hand is coming from below instead of above, which feels less threatening. This article provides a step-by-step guide to petting a dog that I found very helpful.

Many sites are dedicated to preventing dog bites. While I often think of children getting bit by strange dogs, many dog bites are from pets that previously seemed to do well with small kids. This site does a great job describing typical kid behaviors that can lead to unfortunate outcomes. Basically it reminds us that kids can behave in ways that pester even the most patient adult or canine. While an adult can walk away when they need a break, many dogs will feel trapped. Some of the guidelines are to not bother a dog when they are eating, if they are sleeping, or if they are chained or fenced. Also, dogs don’t like being handled roughly, are bothered by too much noise, and don’t appreciate people invading their space. One way kids invade a dog’s space is by giving hugs. While some dogs will tolerate hugs, they do not enjoy them, and kids should be taught not to hug dogs—this is the one caveat to my favorite tip I found, “As a rule of thumb, don’t allow children to do to a dog what you would not allow to be done to a toddler.” While I let people hug my toddler (with her permission), I don’t let people take horsey rides on her, I don’t let them pull her hair, and if they tease her or chase her until she’s uncomfortable I will ask them to back off. Our four-legged friends deserve the same respect.

Of course, we all hope to never get into a situation where a dog gets aggressive. But it’s important to teach kids what to do if they are faced with an aggressive dog. A simple tool is to teach kids to “Be a Tree.” Instruct your kids to stand still, keep their limbs (arms) still and at their side, and look at their roots (feet.) In the worst case scenario, if a dog knocks your child to the ground, tell them to cover their face and neck with their arms and hands.

I’m glad I took the time to research a little more about kids and dogs. While I grew up with dogs, and feel pretty confident interacting with them safely, I still learned some new and important tips that I can now pass on to my kids. With all the practice we are getting, my kids will be more than ready for a dog when the right day comes. I really hope their future spouses like dogs…