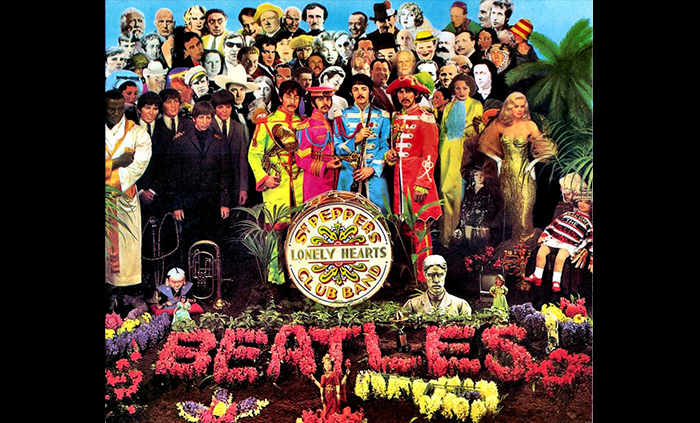 According to Rolling Stone‘s definitive list: 500 Greatest Albums of All Time, the Beatles’ 1967 album Sgt. Pepper’s Lonely Hearts Club Band stands as “the most important rock & roll album ever made.” When I fell in love with the album as a preteen in the early 1980s, I had no clue about its significance. All I knew was that I preferred its lush, shifting, atmospheric sound over The Beatles at the Hollywood Bowl, a live album with shorter songs and a crowd-muddled proto-punk sound.

Why was a tween listening to the Beatles at the dawn of the Reagan era? Because my friend Jenny’s mom had old vinyl albums sitting around—easy pickings for suburban kids too young to buy their own records in a pre-internet era.

Jenny and I spent hours in her room listening to Sgt. Pepper’s until the chords, modulations, and words became involuntary reflexes in our minds. The music became second nature to us—an inevitable, if mysterious, soundtrack to our budding adolescence. We may not have known what a Meter Maid was (in the song, Lovely Rita), but we wanted to become one so we could “take some tea” with Paul.

What neither of us knew in 1981 was that the sounds we absorbed had been downright revolutionary in 1967 when the album was released.

As the Beatles started working on Sgt. Pepper’s in 1966, the band had just decided to stop performing live. Today this may not sound like a big deal, but in 1967 it was huge! At that time, pop bands quickly produced albums of short songs that were easy to play live on tour. This was the bread and butter of the music industry. But Beatlemania had become so extreme that the music at shows was hard to hear and crowds were difficult to control.

Once the band freed themselves from the constraints of writing for a live show, entire new worlds of sound opened up! For one thing, the band was able to incorporate instruments that wouldn’t have been viable for a live electric show in 1967. One example is the use of a 19th century harmonium found on several tracks in the album. Another is the mellow blare of a baroque trumpet on Penny Lane (released as a single, but recorded during the Sgt. Pepper’s sessions).

Not only did an expanded array of instruments make their way into the recordings on Sgt. Pepper’s, so did an expansion of compositional style. In music, modulation is the shift to another key (the tonal center) within a song. This has been used in Western classical music since the 1700s, but it wasn’t until Lucy in the Sky with Diamonds that modulation entered the realm of pop and rock.

Another musical first was the use of East Indian musical structures in a Western pop song. A few pop songs by this time had included incidental Indian instruments (for example, sitar riffs), but for the song Within You and Without You, George Harrison incorporated structural elements of Indian music, including changes in tala (rhythmic patterns) and laya (tempo) throughout the song.

Most dramatically, the studio and mixing board became an integral part of the creative process for the first time. Just some of the sound innovations the Fab Four achieved with producer George Martin and sound engineer Geoff Emerick include:

Lyrically, Sgt. Pepper’s also reflected unprecedented experimentation and maturity. The lyrics of McCartney’s She’s Leaving Home (based on a contemporary newspaper article) gives us three different perspectives: that of the runaway, her parents, and a neutral narrator. In Harrison’s Within You Without You, Eastern philosophy is incorporated in the lyrics. Penny Lane and Strawberry Fields Forever (recorded during the Sgt. Pepper’s sessions) both look back on earlier times in Liverpool, England, while Being for the Benefit of Mr. Kite! takes us back a full century to experience a different era. Conversely, When I’m Sixty-Four imagines a future that’s decades away for the writer. The final track, A Day in the Life, reveals an existentialism that to me is far more subtle and complex than contemporaneous songs like the 1966 hit by the Rolling Stones, Paint it Black.

Additional firsts include first pop album to include song lyrics on the sleeve and first cover art to garner the attention of critics. Some people claim it was Sgt. Pepper’s cover that convinced the graphic design industry to take popular music design seriously.

Yet despite all these milestones, Sgt. Pepper’s remains a wonderfully accessible album! As a kid in the suburbs, I started listening to it from a lack of other options. I fell in love with it because the more I listened, the better it sounded. At the time, I didn’t know any of its achievements—what Rolling Stone magazine calls “an unsurpassed adventure in concept, sound, songwriting, cover art, and studio technology.”

You’ll find more on the Beatles in general in our catalog, including music scores, biographies, lyrics, CDs, movies, and even a fake book.