Spine-tingling reads for an October night 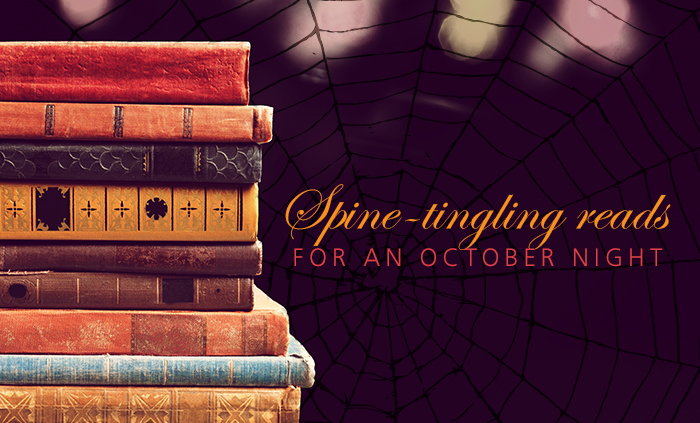 My favorite childhood books were often the scariest. If it had a ghost or a witch or a cover with a wind-tossed old tree on it, I was IN. I loved The Ghost Belonged to Me, by Richard Peck, (in which a 13-year-old boy not only learns he can see ghosts but solves a decades-old mystery) and The Wolves of Willoughby Chase by Joan Aiken, with its darker echoes of The Little Princess and its unforgettable Edward Gorey cover art. I also relished each short episode in Alvin J. Schwartz’s Scary Stories to Tell in the Dark trilogy.

But my absolute most favorite spooky reads were those by Zilpha Keatley Snyder. Featuring barely supervised kids who frequently dabbled in the occult, it’s hard to imagine the books being published in today’s more protective climate—at least for a middle grade audience—but many of the titles I stayed up late reading are still in print, including The Egypt Game, The Headless Cupid, and The Changeling.

I’m pleased to see that supernatural, suspenseful books still reign supreme—both on the seasonal publisher front lists and in the hearts of their young readers—and that more and more childhood education experts point out that scary stories are actually useful in helping children work through important developmental stages involving loss, danger, and self-determination. I’m also thrilled to see new interpretations of the “scary story” genre, and entirely new stories that offer glimmers of the past. Here are a few appearing in our libraries this fall: 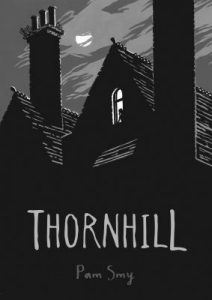 The very first thing you’ll notice about Thornhill, by Pam Smy, is its cover. It just doesn’t get any more gothic than this—pointy black gables and the lonely silhouette of a girl framed in one solitary window. In two parallel storylines—one told in pictures and one told in journal entries—a young girl investigates the abandoned boarding school visible from her new home. When she discovers an old diary and starts reading its unsettling contents, she yearns to learn more about Thornhill’s past and about the mysterious girl she’s seen wandering the grounds. This haunting, sorrow-tinged tale will have you looking twice at any seemingly “empty” building from here on out. (Ages 10–14) 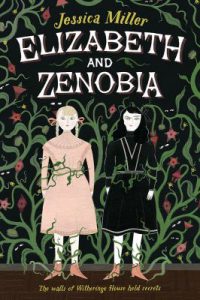 Elizabeth’s best friend is her exact opposite. Where Elizabeth is blonde, Zenobia has raven-black hair. Elizabeth is mild-mannered and considerate, but Zenobia is gleefully wicked. Elizabeth is real. Zenobia is… well, it’s not entirely clear what Zenobia is. But that’s part of what makes Elizabeth and Zenobia, by Jessica Miller, so compelling. When Elizabeth moves with her father to his childhood home of Witheringe House, Zenobia is positive the place is haunted. And Zenobia would know. With her inexhaustible knowledge of séances and the stories of Edgar Allan Poe, she’s the closest thing to an expert Elizabeth has. But when the girls wander too far into a part of the house they’ve been forbidden to enter, a wing containing an old nursery and magically moving wallpaper, they realize some secrets of the house are best left hidden. Gorgeous writing and a clear love for old-fashioned gothic elements make this a deliciously atmospheric read. (Ages 9–12) 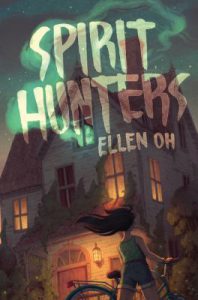 In Spirit Hunters, by Ellen Oh, half-white half-Korean Harper Raine moves with her family to Washington D.C. in hopes of making a fresh start. But the moment they arrive, Harper, who has been able to sense the spirit world since birth, knows there is nothing fresh or promising about their new house. Her brother’s room is distressingly cold, even in the heat of summer, and her brother seems different somehow, not quite himself. As Harper learns more about the history of her family’s new house, she turns to her Korean grandmother for solace and learns about not only the Korean spirit world but about the centuries-old racism of the neighborhood where the house stands. This book is a refreshingly diverse and original entry into a largely homogenous genre. (Ages 8–12) 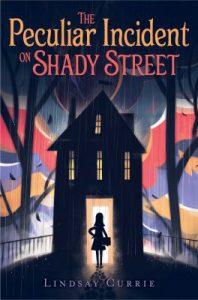 The Peculiar Incident on Shady Street, by Lindsay Currie, also features a move: in this case from sunny Florida to cold Chicago. Tessa is determined to make the best of it but starts to notice weird things, like her old house’s overwhelming chilly gloom and footsteps in the hall outside her room at night coupled with mysterious crying sounds. When she shares her worries with a select few friends at school, the tweens set out on research missions involving the library, a graveyard, and even her brother’s ventriloquist dummy. This title is perfectly spooky with a slightly lighter touch. Tessa’s relationship with her family is delightful, and she balances the new challenges of middle school along with her undesirable new part-time job of chief ghost expert like an absolute champ. (Ages 8–12) 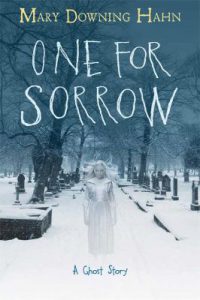 Mary Downing Hahn is the undisputed contemporary master of middle grade ghost stories, and her book One for Sorrow does not disappoint. Taking place in the fall of 1918, the story centers on Annie who is entering sixth grade at a new school and hopes to befriend Rosie, the most popular girl in the school. But almost immediately, Annie is “claimed” by Elsie, a clingy, troubled, and thoroughly unpleasant girl whose actions have made her the target of Rosie’s clique. When Elsie becomes sick and dies during the influenza pandemic sweeping the country, Annie is finally able to join Rosie and her friends, but her joy is short lived when a sledding accident disturbs Elsie’s grave. Elsie’s vengeful ghost seems particularly bent on exacting revenge from Annie. The book expertly explores the terrors of youthful cruelty and the universal need to belong, alongside a corker of a ghost story. Historical fiction fans will appreciate the numerous details bringing to life what American kids experienced during the first Great War and the Influenza Pandemic. (Ages 10–12)