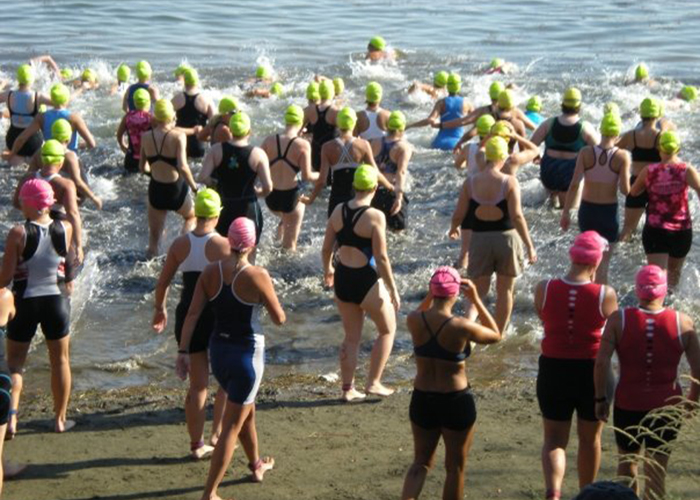 It was the name that got me. After years of running around in matching Wonder Woman swimsuits with my big sister, pretending to be Linda Carter, how could I not jump at the chance of signing up for a sprint triathlon called the West Plains Wunder Woman?

Never mind that at the time I was overweight, had not run since gym class in high school, worked full-time, and had two children at home ages 8 and 5. Oh, and did I mention that my husband was going to be gone for 6 weeks that summer of 2008, volunteering as an ESL teacher in China? Clearly, it was meant to be.

Since I knew absolutely nothing about training for one of these, I did what anyone would do—signed up and told all my friends about it. There. Now it was too late to back out. Then I just had to figure out what to do.

The Wunder Woman Sprint distances are: 1/4 mile swim- 10.2 mile bike- 3 mile run.  Swimming and biking are overall pretty enjoyable activities for me. The running was going to be a challenge, and doing them all at once seemed daunting. My goal was simple: I wanted to be able to do the whole event without injuring myself (or others).

There are a number of great training plans online for beginning triathletes, like these from Fitness Magazine  and Women’s Health Magazine. We even had a book or two in the library. I ended up working with a personal trainer to get ready, largely because by the time June rolled around, I began to feel like I was in over my head with only 12 weeks to prepare. Since my husband was out of town, I really needed the extra structure and positive reinforcement that a coach provided.

Training for a tri that summer helped me maintain my balance, juggling everything else while the mister was out of town. Keeping to a structured plan meant that I had to carve out time every day for myself and insured that I took time for good self-care.

I loved that my daughters watched their mom make really positive changes in her eating habits, and start to exercise out of a desire to accomplish a goal, not look a certain way.

Having spent most of my life as a non-athlete (even though I swam competitively in high school, briefly), learning how to enjoy exercising was a game changer for me. Turns out, this body of mine can do some pretty amazing stuff, if I take care of it.

Over the course of training for my first triathlon, I swam, biked, and ran over 300 miles that summer, long before I ever hit the starting line. I felt fantastic, and my family (including the hubby who was now home from China) was there to watch me.

For a first triathlon experience, I highly recommend an event like the Wunder Woman—everyone was so supportive and encouraging. The swim surprised me, and my family, as I came out of the water with the first 5 people in my heat. Everyone passed me on the bike—but the great thing about an event like that is how the other women would shout out “Lookin’ good!, You go girl!, Keep it up!” even as they flew by me.

I have a hard time keeping a race mentality on a bicycle, as the sun is shining, the road stretches ahead, and it’s just so much fun. The run was grueling because my legs had turned to jelly after the 12 mile bike ride. My family watched for me as I came through the transition area for each leg and I loved hearing them cheer and holler for me; seeing my girls waving and shouting “Go Mommy!’  made me choke up a couple of times. It’s hard to run when you’re crying.

At the end of the race, I was tired, sweaty, and anticipating that the soreness would set in later, but I couldn’t stop smiling. All around us, women of all ages, shapes, sizes and levels of fitness were celebrating. My then 5-year-old daughter said to me, in a very puzzled way, “But Mommy, you didn’t win.” Oh but I did sweetie. We all did.

Now flash forward several years. I caught the tri bug pretty hard in 2008, and went on to complete two more sprint triathlons (even came in 3rd in my age group once), a half marathon, and 2 Olympic distance triathlons between 2008 and 2011.

But over the last two years, life has gotten busier, and more stressful. Somehow I lost the will to get out there and do stuff. I’ve put on a bit of weight, and haven’t been consistent about exercising at all, let alone the kind of training I’d want to put into another triathlon. Along came my childhood friend Sophie, who said “I’m going to do the Wunder Woman this year, Gwennie.  Want to do it with me?”

So, here we are, back at the beginning. What’s the first thing to do when you sign up for a triathlon? Tell everyone you know that you did, so you can’t back out. This year the West Plains Wunder Woman is on Sunday, August 17. I’ll let you know how we did.