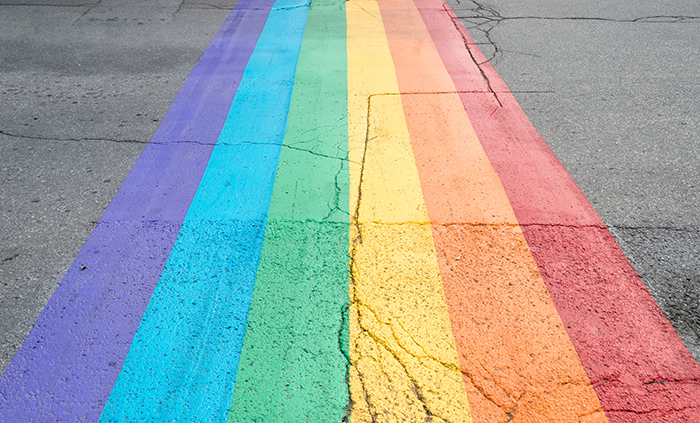 As I wrote about in a previous blog that spotlighted children’s books, June is LGBTQ Pride Month. You can learn more about Pride Month and LGBTQ representation in that post. For adult titles, check out my Pride Month blog on that as well.

Here, I’m recommending some great young adult (YA) literature with LGBTQ representation, which has been on the rise for the last few years. So I had a hard time narrowing down the booklist to a mere five titles. That said, not everything that’s been published has been great and not every great read is easy to get your hands on. Even so, I found myself with an overwhelming stack of YA books to read and review.

This booklist strives to show the available spectrum in YA literature (yes, within just five titles). Not only are there gay, lesbian, bisexual, asexual, and transgender protagonists within these pages, you’ll also find Latina, Pakistani, eastern European, British, and American Southern families, plus genres that hop from modern teen romance to magical realism to alternative historical fiction. The represented cultures are conservative and liberal, high tech and Victorian, and religious and agnostic.

If you choose to dive into the further reading list below or the eBooks and audiobooks available on OverDrive, you’ll find that the genres and characters are even more diverse.

My hope for this booklist is that just about every teen can find him, her, or themself well represented in the pages of one of these titles. Certainly, YA publishers are working hard toward making such a goal a reality.

The Gentleman’s Guide to Vice and Virtue by Mackenzi Lee

Seventeen-year-old Monty has been living the wild life—drinking, partying, and hooking up with every man or woman who suits his fancy—and he only expects that lifestyle to get wilder as he spends the next year on tour with his best friend and crush, Percy, and his studious sister Felicity. But all his anticipated escapades are cast into doubt when Monty’s homophobic father introduces his chaperone and lays down the rules of the venture: no drugs, no parties, and absolutely, unquestionably, no bringing home men.

In this steampunk title, Mackenzi Lee’s prose is fast-paced and attention-grabbing without losing its Victorian tone. The Gentleman’s Guide to Vice and Virtue evokes the irreverence of Oscar Wilde, without allowing any doubt as to the romantic inclinations of the central character. While Monty is not necessarily a likeable character, his suave confidence easily pulls the reader into Lee’s twisting plot.

When the Moon Was Ours by Anna-Marie McLemore

Miel, a teenage Latina, grows roses from her wrists. Samir, a trans Pakistani boy, hangs moons. That was enough to hook me into this beautiful story of love and friendship. Musical and folkloric in tone, When the Moon Was Ours offers a journey of self-exploration in its many intersections: between race and gender identity, fairy tale and love story, and modern and mythic themes. The characters are vivid, the prose inviting, and the plot expansive.

Tash is a Tolstoy fangirl and the director of the YouTube series called “Unhappy Families,” written and produced by Tash and her small group of friends. The “Unhappy Families” production is driven by their passion and interest rather than by its tiny viewership—until its number of followers boom overnight. Suddenly, Tash is famous, and her online “friends” become plausible real-life acquaintances, including Thom Causer, on whom she has a not-so-subtle crush. But Tash has another potential obstacle in her way: while she’s interested in romance, she’s asexual. Will Thom mind?

Kathryn Ormsbee’s upbeat prose and unafraid acknowledgement of modern technology and digital society makes for a refreshing, easy read. Tash’s unabashed adoration for the things she loves makes it hard for the reader not to fall into Tash Hearts Tolstoy headfirst.

Georgia Peaches and Other Forbidden Fruit by Jaye Robin Brown

Joanna Gordon has never hidden the fact that she’s gay—until now. Jo’s father, a radio evangelist, asks her to keep her sexuality on the down-low when their family moves to the small, conservative town of Rome, Georgia. Although she doesn’t like the idea of going back into the closet, Jo briefly enjoys the privileges of straight life. Navigating the social world seems easier than when she stood out. Of course, this contentment doesn’t last long, and soon Jo finds herself falling for a girl in town.

Jo’s unapologetic sass is relatable and inviting, and Jaye Robin Brown has an easy writing style that is likely to make even a hesitant reader feel welcome. Georgia Peaches and Other Forbidden Fruit is an enjoyable, ordinary teen romance, but Brown’s willingness to dive deep into queer identity and heteronormativity elevate it beyond just another summer read.

Simon vs. the Homo Sapiens Agenda by Becky Albertalli

The inspiration for the 2018 film Love, Simon, Simon vs. the Homo Sapiens Agenda is a sweet, teen read that explores the identity crises that can arise for closeted gay teens—even when they are part of close, accepting families. Simon is the son of two happily married high school sweethearts, with loving siblings, good friends, and decent grades. But when a classmate anonymously admits to being gay on a social media site, Simon starts to long for more. He contacts the classmate, called Blue, and they start up a lengthy correspondence of e-love letters. Neither finds themselves quite able to come out with their true identities to the other. Perhaps one of the most valuable insights offered by Simon vs. the Homo Sapiens Agenda is the experience of being outed without your consent. Simon is forced to navigate the pain of being outed without choosing the time, place, and people he tells.

Albertalli’s sequel, Leah on the Offbeat, was released just this April and is also available in print, and as an eBook and audiobook.