7 Cookbooks for your plant-based diet resolutions 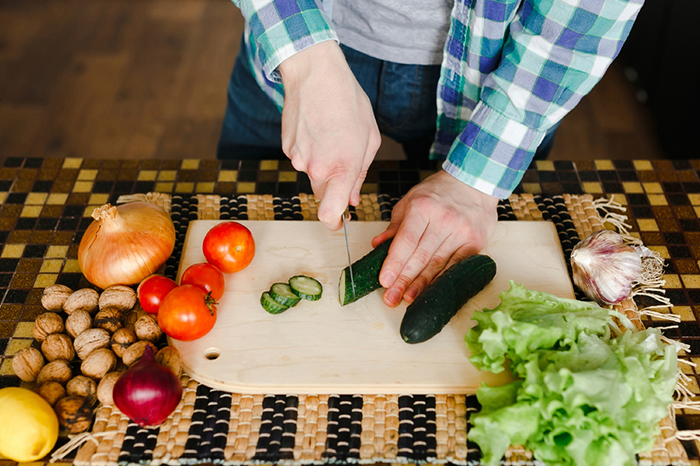 This year I will have been vegetarian for some 15 years, if memory serves me right, and vegan for roughly the last 10. And yet, there was a time I barely knew how to peel a potato. I had fancied myself pretty decent at grilling steaks or baby back ribs but vegetables were terra incognita, and some of my early attempts at vegetarian or vegan cooking yielded mixed results indeed.

Around the New Year especially, I sometimes get asked for advice by people who are contemplating a similar change in lifestyle, and I always suggest first that they get a good cookbook. In fact, get several good cookbooks, because even though restaurants seem increasingly to offer veggie-friendly meal options, you’re still likely to spend a lot of time behind the stove. And few things will crush your New Year’s determination faster than a string of unsatisfying meals.

So whether you’ve resolved this year to go vegetarian or vegan, integrate more plant-based whole foods in your diet, or simply diversify your home cooking, these recent and forthcoming cookbooks should provide all the inspiration and instruction you need: 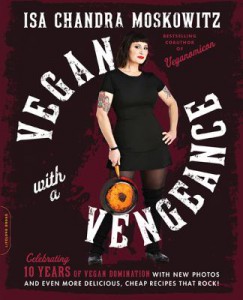 When Isa Chandra Moskowitz’s Vegan with a Vengeance came out ten years ago, it was something of an anomaly. Vegetarian and vegan cooking was still heavily associated with the healthful but insipid hippie fare of yesteryear, but Moskowitz’s approach to food took its cues instead from New York’s late 80s punk scene, where she first practiced her culinary skills prepping meals for Food Not Bombs.

This was comfort food made with a punk DIY ethic: hearty, unfussy, and inexpensive. Her brunch recipes in particular—like tofu scramble, tempeh bacon, or “fronch toast” in which chickpea flour takes the place of the traditional egg—have become staple breakfast items in our house. The new 10th anniversary edition, published last year, contains additional recipes and updated, full-color photos. 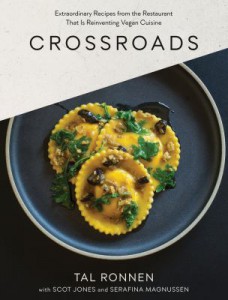 With gorgeous full-color pictures throughout, the Crossroads cookbook features inventive small plates like rapini with black garlic, sherry vinegar, and toasted hazelnuts; hearty soups like cauliflower bisque with fried capers; sophisticated pasta courses like chive fettuccine with asparagus, morels, and prosecco sauce; and decadent desserts like dark chocolate rice pudding with sugared pine nuts and raspberries. A chapter toward the end of the book also features recipes for some of Crossroads’ signature cocktails. 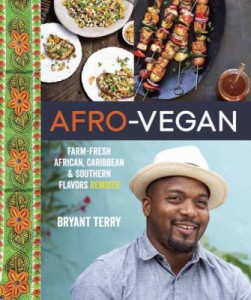 Chef and food activist Bryant Terry has a heck of resumé. A James Beard Foundation Leadership Award recipient and currently chef-in-residence at San Francisco’s Museum of the African Diaspora, Terry’s work has appeared in the New York Times, Gourmet, and Sunset. He’s also been a guest on The Martha Stewart Show, All Things Considered, and Splendid Table, to name just a few. Add to that the numerous plaudits he’s received for his work advocating for food justice and working with urban youth, and it becomes striking just how refreshingly unpretentious the recipes are in his newest book, Afro-Vegan.

Drawing upon food traditions that have remained marginalized and largely invisible in mainstream American cuisine, Terry remixes the flavors of Africa and the African diaspora to produce winning recipes like chilled watermelon soup with mint and quick-pickled cucumber; crispy teff and grit cakes with eggplant, tomatoes, and peanuts; or grilled corn on the cob slathered with a spicy sauce of bird’s eye chiles, citrus, and bourbon. Terry’s own anecdotes, bits of food history, and music recommendations throughout make this a cookbook as rewarding to read as it is to use. 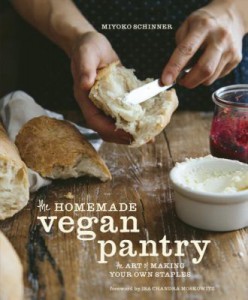 Miyoko Schinner’s Artisan Vegan Cheese, published in 2012, demonstrated ways to combine ingredients like cashews, miso, and agar to make plant-based analogues for everything from a hard parmesan to a meltable muenster and a cultured sharp cheddar. Last year, Schinner turned her food wizardry to other culinary staples in The Homemade Vegan Pantry, where you’ll find recipes for eggless mayonnaise, vegan fish sauce, fluffy flax-seed meringue, and scores of other homecrafted basics.

Some of the recipes are pretty ambitious—I’ve yet to press my own tofu or culture my own tempeh—but others, like her “well-crafted macaroni and cheese mix” can be thrown together in mere minutes. Sure, even mainstream grocery stores now carry a variety of plant-based meat and dairy analogues, but if you’re the kind of home cook who doesn’t like to depend on store-bought substitutes, you’ll want to check this book out. 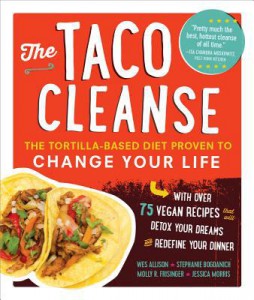 On the one hand, The Taco Cleanse is a hilarious send up of the recent wave of “cleanse diets” and their dubious health claims, but it’s also a book of seriously tasty vegan taco recipes expertly crafted by the book’s dedicated team of taco scientists.

Build your own custom tacos from fillings like radiant rajas or therapeutic tempeh pescadillo, and sauces like spirited salsa inglesa or cilantro-avocado tranquility sauce. Or turn to the section on “artist tacos” and find complete taco recipes for every meal of the day, from tropical breakfast tacos to chocolate-raspberry dessert tacos. An additional section on “supplements” provides formulas for margaritas and other cocktails to supplement your taco-based diet regime.

After actress Jennifer Aniston started talking about the taco cleanse, the book quickly sold out on Amazon, but the library will have copies going out soon to those who have jumped aboard the growing wait list. 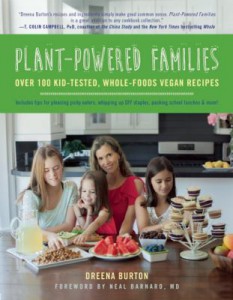 We only have the one kid at home, and she’ll eat almost anything, including the toes of your favorite socks if you give her half a chance. She also happens to be a dog. But if you have fussy human children at home, finding new favorites for them to eat can be an obstacle, whether your family is transitioning to a plant-based diet or you just want your kids to eat more veggies.

In either case, veteran cookbook author and mother of three Dreena Burton might be able to offer some help in her newest book, Plant-Powered Families, which features over 100 kid-tested, whole-food recipes like artichoke spinach dip, smoky bean chili, or “Shipshape Joes,” a lentil-based take on the Sloppy Joe. 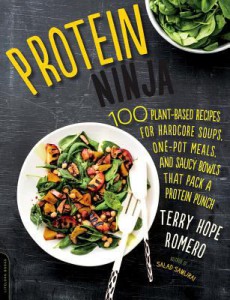 Terry Hope Romero first became known in vegan cooking circles as co-host of the Brooklyn public-access television show Post Punk Kitchen and co-author with Isa Chandra Moskowitz of books like Veganomicon and Vegan Cupcakes Take Over the World. Since then, she’s gone on to produce some fabulous cookbooks on her own, including Viva Vegan!, Vegan Eats World, and Salad Samurai.

Her upcoming book, Protein Ninja, promises 100 recipes for protein-rich, plant-based meals, including plenty of soy and gluten-free options. The book is due to be published later this February, with library copies hitting the shelves shortly thereafter. Place your hold now and you’ll be well prepared every time someone asks, “Where do you get your protein?”.